The Severes Tall in the Saddle.
Saddle makers carve works of art.

The saddle was an elaborate piece of work, carved with California copper roses, wild roses, sunflowers and three different types of leaves. A red leather dyed border trimmed a dyed brown background. Braided rawhide accentuated the comers, the horn and cinch. Behind it and other examples of their work, Randy Severe and his uncle, Duff Severe, felt right at home surrounded by their tools at a work bench that exactly duplicated the one in their own saddle shop – down to the dimensions of the stamping rock. About the only thing missing was their huge sewing machine. They were at the Festival of American Folklife to demonstrate the art of making saddles and braiding rawhide.

The mall in front of the National Museum of American History at the Smithsonian was the gallery for about 10 Masters of Traditional Arts in July 1994. For 10 humid Washington D.C. summer days, these artists demonstrated their skills and showed hoards of tourists why they, above all their peers, had been selected to represent their particular craft – and how they are passing the tradition on to new generations. Duff and Randy Severe, Western saddle makers and rawhide braiders supreme, joined masters of weaving, potting, lei making, wood carving and lace making to show their skill at saddle making and leather braiding.

In 1982, Duff Severe was one of 15 original Master Craftsmen named National Heritage Fellows by the National Endowment for the Arts. He was selected after the Smithsonian judges found him most mentioned by his peers when asked who was the best leather worker in the country. The National Heritage Fellows program is designed to preserve and promote the traditions in which the various artists are trained. Severe has exhibited his skills at the Smithsonian six times as part of this program. This year, the Institute invited both Duff and Randy to participate at the Festival of American Folklife. Marjorie Hunt, the folklife program’s curator, says, “Without a doubt, they are the greatest Western saddle makers in the country.”

It started with a sheepherding father in Idaho, who taught his sons, Bill and Duff Severe, the art of braiding rawhide and turning it into beautiful pieces of gear. After apprenticing for 10 years in the famous saddle shop, Hamley’s, in Pendleton, Ore., the brothers went out on their own. Since 1955, Severe Brothers has grown in reputation by word-of-mouth. They’ve never spent a nickel on advertising, they say. Demand for the saddles is such that they have a policy of accepting orders only during the month of January each year.

The tradition is carried out by Bill’s sons, Randy and Robin who run the shop while Duff, still an advisor but retired now, works on his hobby of producing miniature saddles. Made to scale, these miniatures are attracting the attention of collectors all over the country. The one-quarter regular size saddles on exhibit were complete in every detail. One particularly popular model had hand-tooled wild roses and scrolling, pieces of silver and rawhide braiding for decorative accent, an exact proportioned 30-30 carbine rifle fit snuggly into a scabbard, and tapaderas covering the stirrups.

Duff estimates that over the years he has produced about 10,000 regular saddles. He concentrates on turning out Duff Severe in front of display of his miniature saddles. miniatures now. To date he’s made and sold about 65 of the miniatures, 30 of which adorn a limited edition bronze sculpture of Duff done by Sedona, Arizona artist Clyde Ross Morgan.

Duff won’t accept custom orders for the saddles. He says he just dreams them up and creates a new design with each one. He doesn’t make them specifically to sell, mainly for enjoyment. If they sell, that’s okay too! The fit of a custom saddle is just as important to the Severes as the cut of a custom designed suit is to the Saville Row tailor. It must work on the horse and under the rider. Robin hand carves the tree, which is the skeleton of the saddle. Randy puts the ‘flesh’, or leather on and, depending on whether it’s a working saddle or a trophy saddle, determines how much design and pattern will go into the finished product.

Randy works without a pattern, creating every saddle from scratch. None are alike and none can be duplicated. The design is drawn freehand with a dental instrument on wet leather, then tooled. Using various utensils, the leather is lifted, pushed or beveled. Variations in color are made by tooling. The pattern can be anything, but one of the favorites over the decades has been the oak leaf and acorn. Flowers are often used – wild roses, sunflowers, and a flower found only in the Northwest and bearing that name is also popular. Duff free handed a design known simply as “Duff’s Flower,” which resembles a poppy and is often used because it looks so good on leather.

Like cars, the styles of saddles have changed over the years. They’re more streamlined and comfortable now as the demand for pleasure riding equipment grows. In the early 1900s- when horses were ridden all day – the saddle was designed with the comfort of the horse in mind. Now riding time is shorter and the prime concern is for the comfort of the rider. The Severes design saddles that meet both demands. Not only are they a work of art, the saddles are guaranteed to last a lifetime and be strong enough to rope and hold anything a saddle horse will hold – the biggest steer or bull.

The Smithsonian’s Hunt quotes a rodeo cowboy as saying, “The Severes are the Mercedes Benz of the business.” To Randy, the challenge to keep the family reputation up always exists’. “I want to make the best and most beautiful saddle you can find,” he says, “and then make the next one more beautiful than that.” 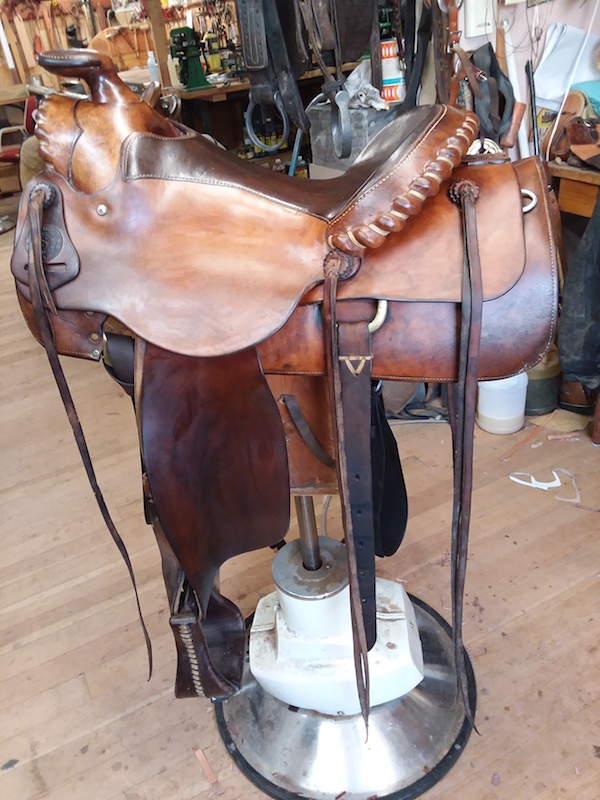